Los Angeles, June 25, 2012. Curious about what’s going on with the Treyvon Martin case or the Canadian Cannibal? Wild About Trial™ is a brand new mobile app and website designed for those with a desire to know every last detail to the famous criminal trials in the news.

Wild About Trial™ covers between 15 and 20 of the juiciest criminal court cases nationwide. The app is free to download and, for only 99 cents per trial, you can select exactly which cases you want to follow. Each trial provides unlimited access with play-by-play updates directly from the courtroom, biographies of all major players from judges to defendants, legal documents pertaining to the case, live video of court proceedings when available and in-depth analysis from the Wild About Trial™ team of legal experts.

Alison Triessl, criminal defense attorney and creator of Wild About Trial™, says this app was born out of her love for criminal trials:

“I, like millions of other trial enthusiasts out there, am fascinated by these trials,” Triessl said. “I like to know who the players are, what the backstory is, when it happened, how it happened and why it happened…with Wild About Trial™ on your phone or tablet, no matter where you are, you will get up-to-the-minute updates on the trials you are most interested in, all in the palm of your hands. What could be better than that?”

This app is perfect for those dedicated to following big-name criminal trials from start to finish. No more searching the Internet for details shared three days too late… with Wild About Trial™ you feel as though you are inside the courtroom. Not only is it easy to use, but it provides information you won't get from any other source. This is an App dedicated to real criminal trials for people who are, simply put, WILD ABOUT TRIAL™." It is available now on iPhone and Android. Download it today.

From a Dump with a dirt lawn, to Tequila fueled Tijuana Road Trips, to living with Losers, Addicts and even a stripper Before becoming a success in Hollywood, this is the life story of Adam Carolla

In NOT TACO BELL MATERIAL (Crown Archetype, On Sale: June 12, 2012; Hardcover, $25.00) Adam Carolla reveals all the stories behind how he came to be the loveable curmudgeon he is today.

Before Loveline and The Man Show, before the Guinness World Record–breaking podcast and the New York Times bestseller In Fifty Years We’ll All Be Chicks, Adam Carolla’s story began in a house that was such a dump the neighborhood kids called it “The Barn.”  His abode was pathetic, and his early life was peppered with lowlights such as the Carolla tradition of Trash-Picking Thursday, having his beloved unicycle stolen, or getting carbon monoxide poisoning from the customized microbus of his hippie mom’s friend “Zorback.”

Carolla takes us from teenage years marked by little income and no self-esteem – including having his employment application rejected by the local Taco Bell - to early adulthood sharing a futon with his stoner best buddy, to his days working construction and residing in a house that earned the name “Chez Nude.” Finally with determination, talent, and a little help from a guy named Jimmy Kimmel, Adam climbed to Hollywood stardom and a luxurious home in the Hollywood Hills.

Some of the hilarious stories Adam recounts in the book are:
·      How he got the middle name “Lakers”
·      An incident involving Molly Ringwald’s sister and nude sunbathing
·      Breaking and entering for late night skinny dipping at LA’s upscale Mulholland Club
·      The worst job he ever had, doing earthquake rehab for the county of LA
·      A terrible Vegas road trip with a gassy Jimmy Kimmel
·      An awkward situation with a Dixie Chick . . . and much, much, more!

Adam Carolla is a natural storyteller with a bottomless pit of material, including stories of celebrities he has insulted over the years: Tom Cruise, Queen Latifah, and Gwen Stefani, to name just a few. Wild, shocking, and drop-dead funny - all while managing to be touching and inspirational - NOT TACO BELL MATERIAL will not disappoint.

#     #     #
About the Author
ADAM CAROLLA is a radio and TV host, comedian, and actor. Carolla is well known as the co-host of the syndicated radio and MTV show Loveline and the co-creator and star of The Man Show and Crank Yankers. Adam appeared on Dancing with the Stars and the current season of The Celebrity Apprentice. He currently hosts The Adam Carolla Show, the Guinness World Records Most Downloaded Podcast, available daily on iTunes and AdamCarolla.com.

For more information, or to schedule interviews with Adam Carolla, please contact:
Valerie Allen at 310-264-1888 or Valerie@AdamCarolla.com 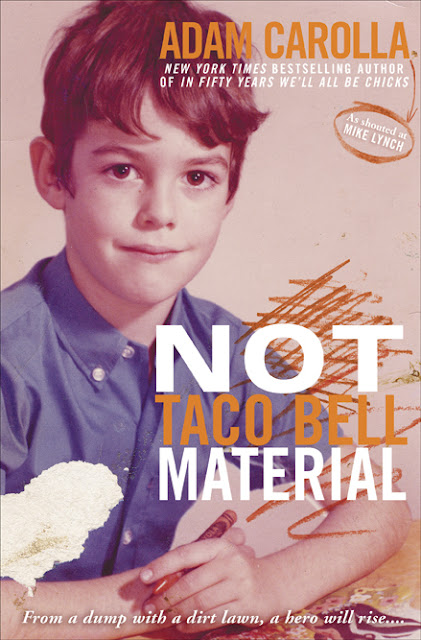